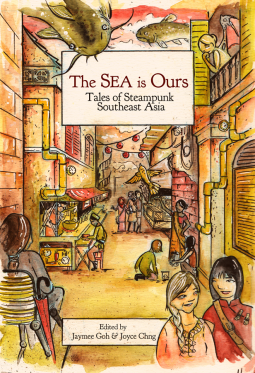 The stories in this collection merge technological wonder with the everyday. Children upgrade their fighting spiders with armor, and toymakers create punchcard-driven marionettes. Large fish lumber across the skies, while boat people find a new home on the edge of a different dimension. Technology and tradition meld as the people adapt to the changing forces of their world. The Sea Is Ours is an exciting new anthology that features stories infused with the spirits of Southeast Asia’s diverse peoples, legends, and geography.

WHAT A CUTE COVER!! Definitely a cover that would make me do a double take to take a closer look. Partly because of the ochre yellow colour with the pops of red. You don’t really see that many books with covers that are monochromatic, or a bright yellow for that matter.

That being said, I do feel that as cute as the cover is, the illustrations feel a bit juvenile. I’m not sure if that’s the right word to use here, but that’s the feeling I get. It’s not entirely a bad thing though! I just feel that maybe the cover needed someone who has a slightly more refined art style. Although, I did really like the first piece of art the artist did to promote the book in 2014!! I feel like this kind of simpler style would have been more held together than the final design. I’m not even sure if that is making sense.. 😥

The intro to the anthology felt really dramatic, but in a good way. Felt quite empowering and inspiring and I challenge any other SEAsian SFF author out there to read it and not feel inspired!! My only issue is that saying “hella queer” in the intro felt a bit out of place, compared to the rest of the tone that is used in the intro. But maybe that’s just me being a bit nitpicky… 😜

Getting to the Meat of the Book

In On the Consequence of Sound, the idea that music is integral to levitation and commandeering ships is so on point and ingenious. Why hasn’t this been used more?!?! Also sky-whales. I loved the idea of them since Treasure Planet. Why don’t people write more about sky-whales??? I love dragons but come on, SKY. WHALES.

It was a lot darker than I expected but I think that works to it’s advantage because it’s such a strong first story to hook people in. I just wish it was a bit more fleshed out so I could enjoy a bit more world building or just more in general. It’s a good short story, it’s just that I was starting to get into the rhythm of it and then it felt like, PLONK that’s it. It’s done now. Go home. And I was like shaking my kindle going, WHERE IS THE REST OF IT?????? So if you’re reading this Timothy Dimacalli, I WANT MORE OK!!!

The Last Aswang had me SO hooked, I wish it was a fully fleshed out novella!! Not a full fledged novel, but something around 150 pages or so. It did wrap up quite nicely though, didn’t feel rushed or that there were any loose ends. Although I won’t say no to more from this world. I had similar feelings towards Life Under the Glass. I should just make a list of the stories I want more of and throw a temper tantrum until I get more…

The Unmaking of the Cuadro Amoroso reminded me of The Summer Prince. So I might have been more impressed with the plot/idea had I not read that book, but ah well. It’s still very enjoyable! I do like that concept though, of young artists picked from the public to be used by the government only to have it backfire. The polyamorous relationship was a really great touch too. I think poly relationships are something that could be explored more in speculative and SFF fiction! What’s the point of having the ability to create infinite diversity in infinite combinations if you don’t explore it!!

Working Women was a story that I felt had some great potential and had me happy clapping at the inclusion of Samsui women. Especially that she was called a ‘mechanical golem‘. I do love golems. And also that she was not an android. But it felt a bit messy and incomplete. I would love to read a more polished re-edited version of it because I did really love the characters and the concept of the whole thing though. I think it could also benefit from being told in a graphic novel format. Or even a crime novel series. I’d read that. 😄

Unfortunately, I didn’t love The SEA is Ours as much as I thought I would. That is not to say that I hated it. There were quite a lot of misses but purely for the reason that I felt that they weren’t fleshed out enough for a short SFF story. I know that they are short and as such, can’t be as full as a regular novel, but there were also stories in there that did feel fleshed out and still followed the same size restraints. Then again, it might just be my own bias that I’m used to reading a lot of mainstream published SFF that have been through a lot of editing and the like.

Since my copy was sent to me via Net Galley directly to my 3rd generation Kindle, I think the formatting issues I had could simply be a fault of Net Galley and not the publisher or whoever put the e-book together. I noticed quite a lot of typos and loads of words were smushed together that really distracted me and brought me out of the story. It was quite irritating but it wasn’t a massive issue.

It also bugged me a little that even though the Filipinx stories were great, there was a lot of them and it felt like they were swallowing the whole book!! Don’t get me wrong, I’m enjoying the stuff that seems to be happening in the Philippines in terms of speculative fiction, but I was expecting more of a selection of SEA in this book. And this was one that felt like it was more about Filipinx’s.

OVERALL it was a very strong step in the right direction and definitely worth it if you love this kind of fiction or Scifi, or if you’re a fan of Steampunk who like me, has become disenchanted with how white the genre has become.

THE SEA IS OURS :