As per usual with my shitty luck, my chronic illness flared up over the break when I was AT HOME. Which meant I couldn’t really concentrate on anything or have enough energy to do much for more than half of it. AND I EVEN FORGOT TO DO MY HANUKKAH BOOK TAG!!!!!!!!!!!!! I’m most upset about that to be honest…

Also upset that I only managed to read one book the whole month… ☹ I was hoping to fit in at least 3 or so more since it was the last month of 2016, but oh well.

ALPHABET OF THORN
by Patricia A. McKillip 👸🏻⏳📜 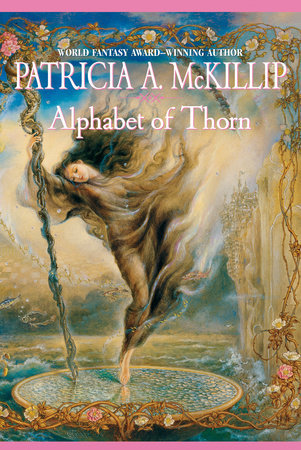 I wanted to read this in the first place because of the beautiful cover. What can I say? I’m a slut for beautiful covers… BUT ALSO because it was a book about books! Sort of!!! Well it’s really more about an orphaned girl who was adopted by librarians who also double as translators, who now works under this grand castle spending her days amid books and unknown languages. The blurb is great because it doesn’t give too much away, but gives just enough away to get you interested…!! It’s not normally the kind of book I read to be quite honest, but once in a while I’ll pick some high fantasy up and be whisked away by the prose. This is deffo one of those cases. I’ve only given it 3 out of 5 because I felt the ending was a bit rushed and simple, and I kinda wished there was more exploration with the floating school!!! It reminded me at times of the Arrows of the Queen trilogy, which I was OBSESSED with earlier this year. That series exceeded where this one failed simply in terms of the world building. Which is fine considering this was a stand alone book that was under 300 pages. OH WELL.